One of the kiddos wanted waffles for breakfast Sunday – so, waffles is what she got.

To make the waffles, we use the same batter as when we make pancakes – take a look at the post for my banana pancakes. For these waffles, just leave the bananas and cinnamon.

Then, just add in the amount of chocolate chips and walnuts you want (or any variation thereof) and you’re good to go. Cook the waffles in your waffle iron, per the instructions and serve with butter and syrup, if desired.

I mentioned a few posts back that I like to keep puff pastry on hand. The kind I buy has two sheets in the package. I used one sheet to make these cinnamon rolls. The other sheet was used to make something delicious and savory!

I started by letting the pastry thaw out, until I could easily unfold it and roll it out a little bit. Once the pastry was ready, I decided on what I would use in my rolls – prosciutto, Swiss gruyere cheese and gouda cheese. I found these three ingredients at my local Aldi’s.

I started by layering on the prosciutto until the puff pastry was covered side to side, almost touching the edges.

I then sprinkled on the cheeses. I didn’t measure, but I would guess that I used between 1/4 – 1/3 cup of each cheese, give or take. 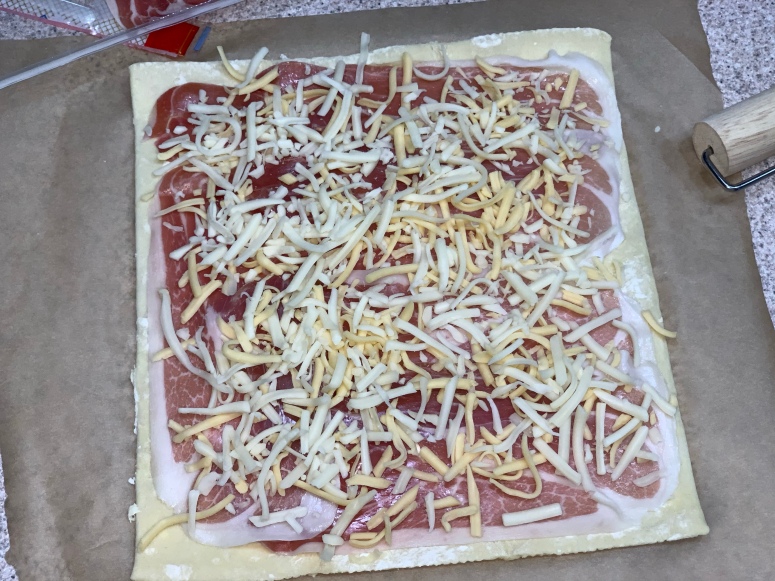 I then rolled the pastry up into somewhat of a log and then cut into 8 rolls. I then placed them on parchment paper, on a baking sheet.

They were baked in a 400 degree oven for about 15-20 minutes (until they were golden brown).

The flakiness of the pastry, coupled with the savory cheeses and prosciutto were a great combination.

These would make great appetizers for your holiday gathering (or even just a snack). They would also be great for brunch! They reheated nicely, as well.

What’s not to love about cinnamon rolls?? We love them in our house – and we don’t mind popping open a store bought can of them, they are delicious. But, I decided that I wanted to make some myself. Now, I didn’t want to roll out dough – at least not this time – so I decided to use store bought puff pastry. So, I guess they are ‘semi-homemade’ – but, so delicious!!

Puff pastry is something that I’ve started keeping on hand – there is just so much that you can do with it. I started by letting the puff pastry thaw, until I could open it up (it comes folded in thirds) and roll it out just a bit.

Then I just sprinkled on brown sugar, cinnamon and a little bit of white sugar. I just eyeballed it and added as much as ‘looked right’ to me.

Then I rolled the pastry up, being sure to not let any of the sugar and cinnamon fall out, into kind of a log.

One sheet of pastry dough easily makes 8 cinnamon rolls. To ensure that I got the rolls the same size, I started by cutting the log in half, then cut the 2 halves into half again. Eight perfectly sized cinnamon rolls!

I put the rolls onto a baking pan (on parchment paper, for easier clean up).

Cinnamon rolls aren’t complete without a glaze! While the rolls were baking, I made a simple glaze using confectioners sugar and heavy cream. Yum!

After the rolls were done, I slathered on the delicious glaze!

They are best served warm, right out of the oven, but even reheated (or even cold) – they are still good.

I’m thinking that these cinnamon rolls may be our Christmas morning breakfast!!

This isn’t a new recipe, but a derivative of recipes I’ve shared before – take a look at the recipe for my banana pancakes and just make your pancakes without the bananas! Or, use your own go to recipe for pancakes (or even frozen pancakes) – whatever works for you!

I buy my cookie butter at Trader Joe’s, but I’ve recently seen that Walmart is selling cookie butter – I haven’t tried it though.

First things first, I promise that there wasn’t an intentional abandonment of this blog – but, you know, life sometimes gets in the way. But, I’m back!!

This afternoon, after working on some redecorating in the morning (and not getting breakfast, unless you count coffee) – I decided that I wanted some sausage gravy and biscuits for brunch. I decided to keep it simple and just use canned biscuits – let’s be honest, the sausage gravy is really the star anyway!

So, canned biscuits in the oven and onto the gravy.

I started by browning a 1 pound chub of Jimmy Dean’s breakfast sausage (don’t drain). To the sausage, I added in 3/4 cup of flour (1/4 at a time) and let the flour start to cook with the sausage – when you don’t see any raw flour, add the next 1/4 cup, until you’ve put the full 3/4 cup in.

The next part is to add in 3 cups of milk and stir everything through. Once it starts to thicken, reduce the flame to simmer. Keep stirring as it thickens.

This recipe comes together pretty quickly, so make sure you time it right with your biscuits.

It’s so simple, that I’m not writing up a recipe – but you should be able to make it easily enough from the information here!